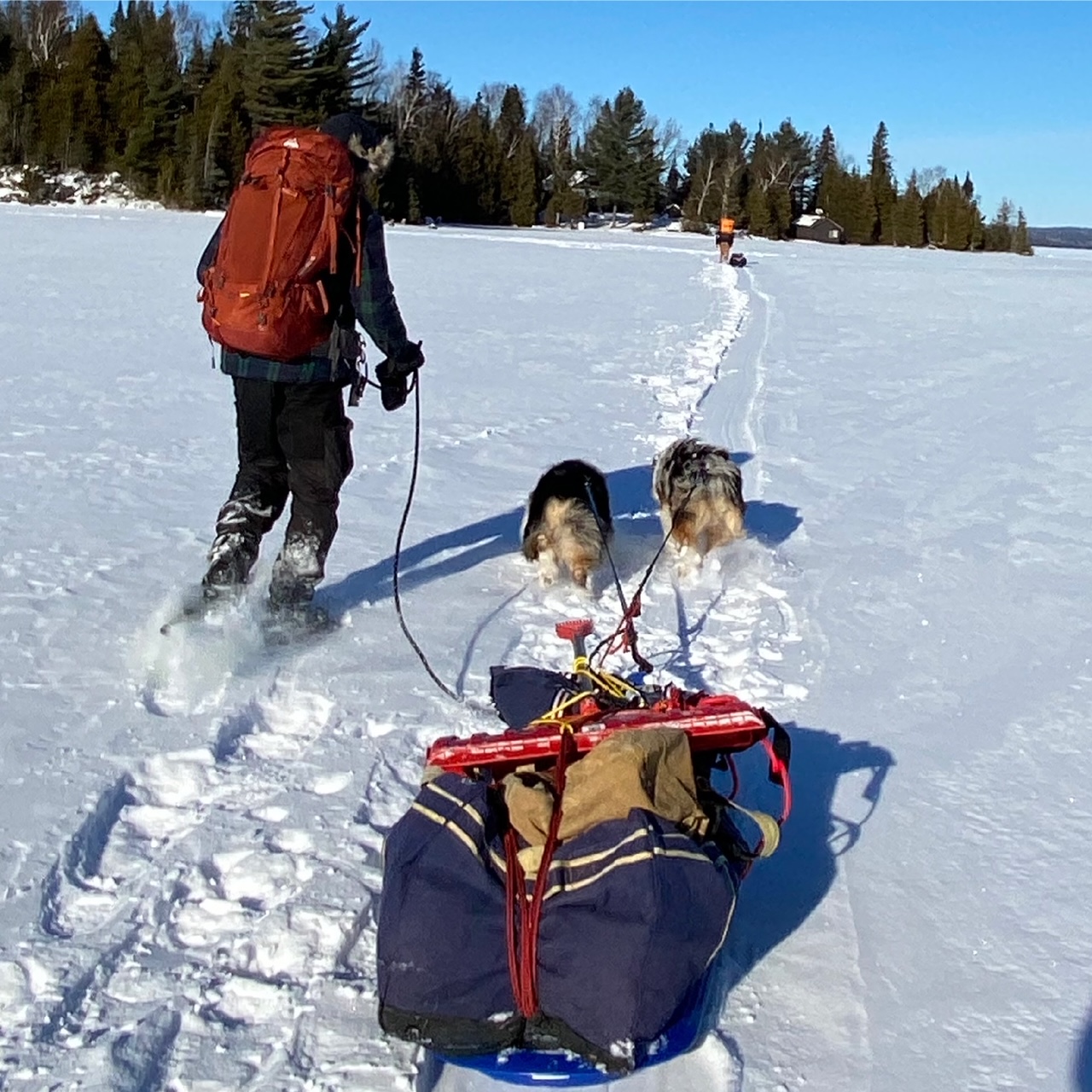 It is the perfect place to isolate – at our island cottage on an ice-bound lake. It is a journey I have made before, a long time ago. This winter seemed the ideal time to repeat that winter’s journey.

The wind blows in gusts, snow swirling across the ice like a thick fog, tumbling over the frozen lake’s rippled surface. We march through the driving blizzard towards the island, one snowshoe in front of the other, pulling sleds with our gear and supplies. Well, everybody else has a sled they are pulling – I have trained the two dogs to pull my load, I am just trying unsuccessfully to keep up with them, acting more like an anchor. Gradually the soft outline of the island and our cottage materializes in the snow. We are almost there. Not that we were worried, it is hard to get lost on a lake that I know so well. And it is only a couple of kilometres from our parked truck to the destination. I had, in fact, let my mind drift like the snow, back to a winter’s journey I had made here many years ago. The last time, in fact I had made this trek in winter.

It was more than 40 years ago, shortly after my folks had purchased our island retreat. Crazy or brave, or perhaps simply adventurous, they had decided to take their four children on a long walk to visit the cabin in winter. At that time, the back country roads were not kept open through the snowy months. Where now we can drive our vehicles almost to the shore, back then we could only get within 18 kilometres of the lake. And, of course, my dad was not in favour of noisy snowmobiles. Our plan was to ski down the packed access road hauling our provisions behind piled high on toboggans, like Arctic explorers on a trek to the Pole.

We set off in a state of excitement, gliding down the trail, hauling our loads gamely up and down the sweeping hills. Pines were shrouded in heavy snow like ghostly sentries beside the path. The family basset hound trotted gamely ahead, but was not any help. Sometimes he would chase rabbits, falling off the packed trail, and we would have to help in out of the deep powder. We skied along for half the distance, and then removed the skis and tied them into the sleds. Off came the ski boots, and we rubbed our frozen toes. We trudged on in winter boots. The miles stretched on our exuberance waned, and our legs grew heavy. The first glimpse of the frozen lake was like the first glimpse of water at the end of a long portage. With renewed energy we hopped on the loaded toboggans to glide down that long steep descent to the shore.

The lake in winter seemed even more remote and solitary, surrounded by stark, barren, trackless hills. It was also most serene on this late winter’s afternoon when its snow-covered ice was deeply tinted with the gold of the setting sun. We had made it, but before we could get into the cottage, we had to grab shovels to dig out the deep snow that had drifted onto the porch and in front of the door. We got a fire started in the wood stove, not realizing that it would take hours to chase out the winter chill. Finally, exhausted, we huddled where the heat gathered first, high up in the cabin’s loft, cuddling mugs of hot chocolate our mom had made.

Dad stoked the fire with maple and birch logs and cooked up beef stew on the cast iron bean pot set on the fire. Toques, woolen mittens, snow pants, felt boot liners, and parkas were hung from the loft railing to dry – the cottage looked like a laundry. The hound curled on the hearth rug, thawing, and licking snow from his paws. Gradually the log walls soaked up the heat and gave the cottage a cosy warmth.

The next morning, we shovelled a path to the privy and chopped a hole in the ice for water. We strapped on our beavertail snowshoes and headed into the dense groves of naked birch and poplar, and the snow-laden stands of pine, cedar, and balsam that seemed so thick, black, and impenetrable. We augured a few more holes in the ice and tried our luck at fishing. Thank goodness we were not counting on fish for dinner. We stayed for a long weekend and then packed up and set out on the long arduous journey back to our car. It had been a hard trek but an unforgettable adventure.

Now, we have returned. I stoke the fire and hook up the propane tanks for the stove and lights. The trip was a bit easier this time – but the experience remains pretty much the same. Our Aussie shepherds curl in front of the fire while the kids try their luck at ice fishing. Knowing how that will turn out, I put a big pot of stew on the fire. 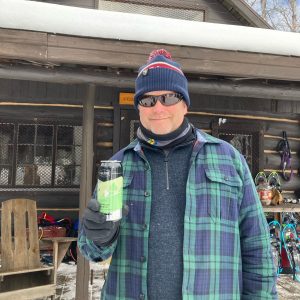 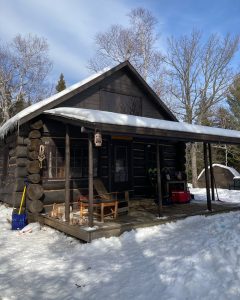