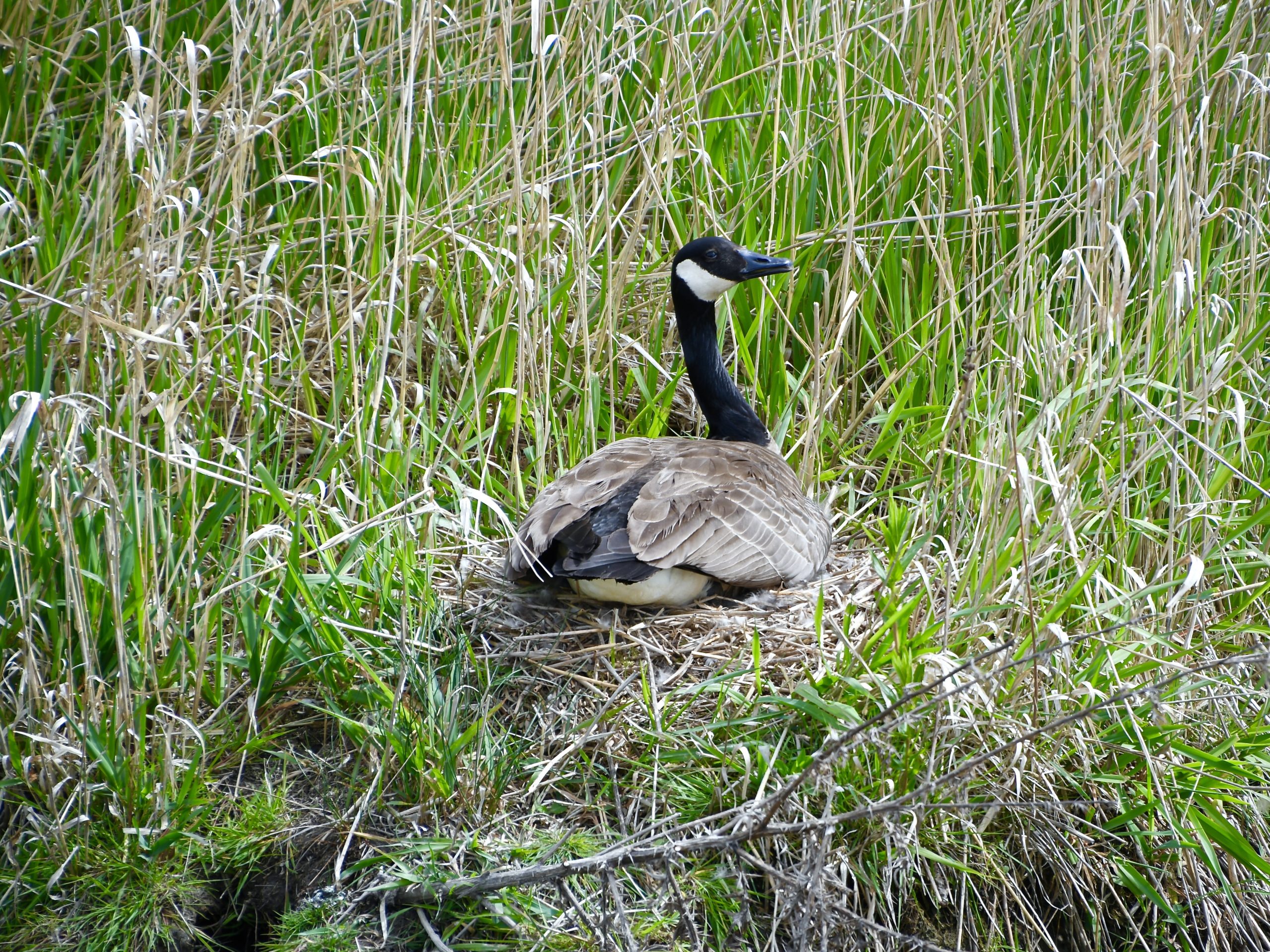 Springtime can be a dangerous time. Not solely because spring is purported to be the season when “love is in the air,” though that remains a good reason to be on guard. No, what I mean is that this beautiful season is a critical time in nature’s scheme. Spring is a time of new life, and our cottage environment puts us in touch with this daily.

Millions of creatures are born. The migrating birds have returned and gather their sticks and twigs for nests.  Some settle for the cottage eaves, holes in trees, or the sweeping branches of the beautiful shade trees that support our hammock. Others will move into the nesting boxes that we charitably supply. Water birds have hidden in the waterside thickets that fringe our cottage shoreline, mothers sitting cautious and still.

Soon, broods of goslings, ducklings, merganser chicks and baby loons appear, gracing our serene bays, following clumsily after their mother along shores, hitching a ride on a parent’s back, or swimming single file behind their guardian. 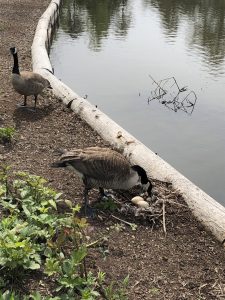 As such, spring is a wonderful time of the year for watching wildlife. The young are out in force, and there is a certain beauty in observing the rearing and development of even the commonest of animals. The Canada geese that we seldom look at twice, only curse them as we gingerly wade through the mine field of their goosy deposits on shore, suddenly become a focus of our fascination when they have a young gaggle of goslings in tow.

Such is the case at our cottage each spring. We don’t even need to get a glimpse of the youngsters, but can tell from the posturing of their parents that they have arrived. The gander will stand on guard at the shore, neck arched in a display of aggressiveness. The mother feeds while he watches, and then the roles are reversed. Never will they graze at the same time.

This year, for two nights running, we are awakened from our sleep by the honking and squawking of the panicked geese. Then, when the tiny goslings make their first appearance, we are saddened that there are only two, when usually there are six or eight. Perhaps the blame lies with the gulls, or maybe it is the Great Blue heron that stalks the shores. Certainly the loons cannot be blamed this time, as the baby geese are not even old enough to get their feet wet.

One thing is certain, with only two surviving goslings it is much easier for us to become attached.  We watch them each morning from our cottage window, as they seem to double in size daily.  They are precocious brats, seemingly intent on giving their parents a hard time. The two demons wait until their protective parents look away, and then run for it. One scampers across the little wooden bridge that crosses to our swim rock, seemingly moving faster than possible for his small and scrawny legs. The female honks and runs after him. This gives the other gosling the opportunity to try his own escape, running awkwardly in the other direction along the shoreline. The holy terrors seem to be laughing as they put their mother through misery.  Maybe it is no longer politically correct to peck one’s offspring, and this has led to such troublesome behaviour in the youngsters. Mother goose gathers the delinquent twins back in, and then peers out over the bay with a look of annoyance, perhaps feeling that the parental care is becoming a little one-sided.

When the male returns from his feeding, the mother goose seems to be chastising him before she waddles off for her own dinner. The gander stands their stupidly, perhaps trying to understand, but his attentions are soon taken up by the two active brats.

Perhaps, once again, nature has gotten things right, a brood of eight goslings would have been far too exhausting for the parents to rear, and for us to watch. 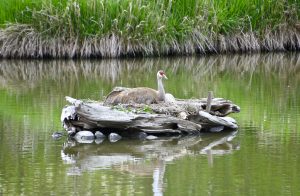 This year, take a moment to think about the wildlife at the cottage. Stay clear of water-birds with young broods, keep pets under control and away from wetland nesting sites, and, although it is always exhilarating getting the boat out for the first time, take care along the shorelines and respect your wakes. The beauty of nature that has attracted us to Muskoka often struggles against our indiscretions and our naiveté can add to nature’s peril during this very dangerous time.